How Confusing is Voice Over Terminology? 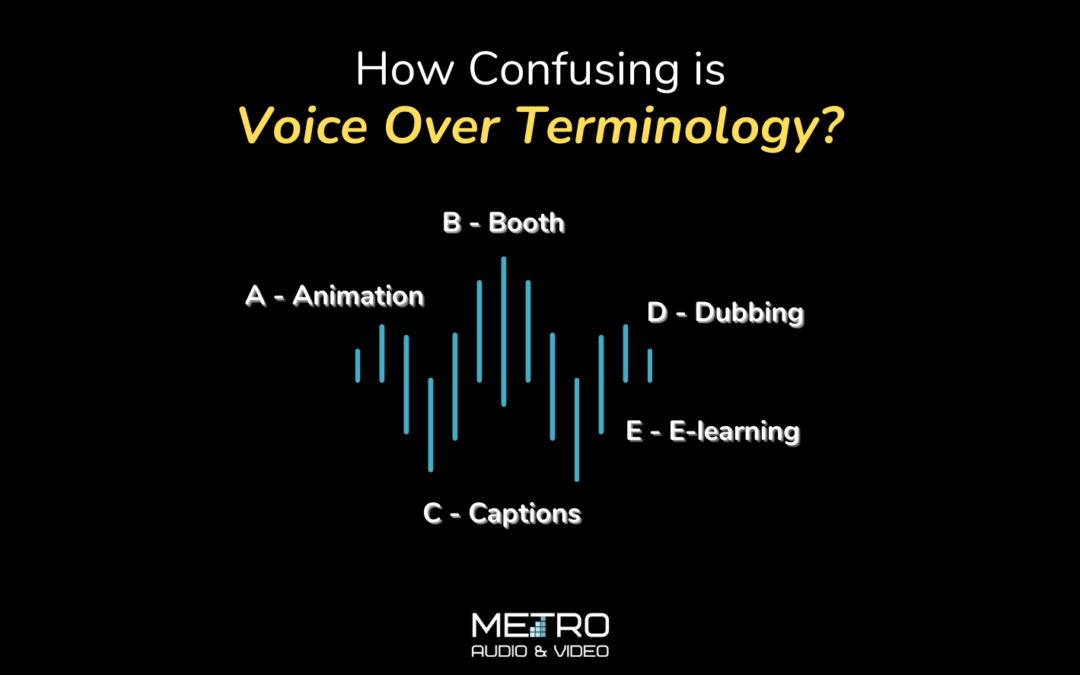 We thought we’d have a little fun while sharing some great information in this week’s blog! We’ve compiled a list of voice over terminology from A-Z to help our clients to navigate the confusing world of the voice over industry. Because let’s face it… Does anyone really know if it should be spelled “voice over” or “voiceover”? Check out the “V” section to find the answer to that! So, If you’re thinking of working with a voice over agency on your next project, then this blog post is for you.

Animation – When it comes to animation, it’s the voice that brings the characters to life and provides a connection between you and what’s happening on screen! Voice actors use their voices to create a character to help emerge their listeners.

After Effects – Adobe After Effects is a program that allows you to edit and create videos. It has many features, such as being able to place text on the screen or change colors. You can also use it for animation and special effects.

Along with voice over production, we provide our clients with After Effects graphic replacement services. This way, their final product is localized, innovatively designed, and has compelling sequences. Talk about a recipe for success!

Check out more voice over terms that begin with A here.

Booth – A sound booth is a room in a recording studio that has acoustic panels and soundproofing to reduce noise. It’s used by artists who do voice over work for commercials, movies, TV shows, video games, e-learning courses, and more.

See more voice over terminology that starts with B here!

Closed Captions – Closed captions are a transcript of the spoken dialogue in a video that can be turned on or off as desired. They’re usually used for videos that have audio content with speech not heard or understood by those watching it.

Read more voice over terms that starts with C here!

Dubbing – Dubbing is the process of replacing the dialogue in a movie, television show, online video, or video game with one in a different language.

E-learning – E-learning voice overs are a way to provide audio instructions for an online course. They can be used as a replacement for text or video tutorials, and they offer the learner the ability to listen to instructions at their own pace.

E-learning projects should always be recorded in a professional voiceover studio with high-quality sound equipment so that listeners aren’t distracted from the learning experience. The trained voice over talent knows how people learn and to speak in an engaging tone.

Engineer – A sound engineer is someone who records and edits audio. They are often employed by a production company to make sure that the sound quality of a video, film, or TV show is high-quality.

A foreign language voice over engineer’s job has more components due to the nature of the projects involved. They use two-sided scripts and must be able to direct foreign-speaking voice over talents.

Graphic Design – A top voice over studio (like us!) can provide comprehensive Flash, graphic, and animation services. Our talented graphic designers are skilled in a variety of programs ranging from Photoshop, Illustrator, and Flash to After Effects and 3D Studio Max.

Healthcare Voice Overs – Whether being used to teach healthcare professionals or patients, or to sell pharmaceutical drugs or medical devices – healthcare voice overs require the closest attention to detail. Healthcare voice over talents should have a clear speaking style so that listeners will understand the message being conveyed.

Industries – Professional voice over studios can help clients in all types of industries get their message across. Some of the most popular industries we serve here at Metro Audio and Video include automotive, corporate marketing, e-learning, finance, government, healthcare, law, life sciences, manufacturing, oil and gas, web development, and video game technology.

Jobs in the Voice Over Industry – The voice over industry is a booming business! There are so many different types of jobs in the voice over world, including:

Stay tuned for our upcoming voice over blogs, which will highlight each position!

Korean – Korean is a language spoken by about 78 million people. It’s the national and official language of both North Korea and South Korea, as well as one of the two official languages in China. Korean uses an alphabetic system called Hangul to write words with letters rather than symbols like Chinese does. It also has many grammatical cases and conjugations which make learning Korean difficult but fun!

Localization – Voice over localization is the process of adapting a translation to meet the linguistic and cultural needs of a particular country or region.

Norwegian – The Norwegian language is a North Germanic language spoken primarily in Norway. It is the country’s official language and it is one of the two official languages in both Iceland and the Faroe Islands. It has been influenced by Old Norse, Middle Low German, Latin, Danish, Swedish and to some degree English. About 3 million people speak Norwegian as their first language, with a total of 5 million speakers worldwide.

On-Screen Text – On-screen text refers to important information being displayed in a video in graphic format. Stay tuned… we’ll be discussing subtitles vs on-screen text in an upcoming blog!

Quality Control – A professional voice over agency will always have a quality control process in place to ensure that they deliver accurate projects to their clients.

Russian – There are more than 170 million speakers of Russian, making it the 7th most spoken language in the world. The Russian language is a Slavic language and the official language of Russia.

Subtitling – Subtitling is the process of adding text to a film or video. Subtitles can be in English or any other language.

Translation – A translation is the process of converting one language into another.

Talents – A voice talent is someone who uses their vocal skills to provide the voice of a character or a narration. They are usually found on the radio, TV, or the internet because their voices are so unique. Some of the most famous English-speaking voice talents are Nancy Cartwright, Morgan Freeman, and James Earl Jones.

Urdu – Urdu is the national language of Pakistan. It is also spoken in Afghanistan, India, and Bangladesh. There are many different dialects of Urdu including Dakhini, Rekhta, Khari Boli, and Modern Standard Urdu. All these varieties have their own scripts but they all share a common vocabulary with Persian roots. It was originally written in Arabic script which is why it has an affinity with Arabic grammar and syntax. Urdu is spoken as a first language by 70 million people and as a second language by more than 100 million people.

Vietnamese – Vietnamese is the national language of Vietnam and also one of the most widely spoken languages in Southeast Asia. Worldwide, 77 million people speak Vietnamese. The Vietnamese language is a tonal language. It has six tones, four of which are significant: the first tone (falling), second tone (rising), third tone (level), and fourth tone (dipping). The other two tones are the fifth and sixth tones, which are hardly ever used in modern Vietnamese.

Voice Over – Is it voice over or voiceover? According to Google, it can really be both!

Xbox – Xbox, like other large international companies, uses voice overs and animations to showcase its products across the globe. See how we helped them with one of their projects.

Zoom – Covid-19 has certainly changed the way many companies work. In the voice over world, Zoom offers high-quality audio and video feeds, as well as the option of adding screen-sharing capabilities. We’ve found it to be very useful in our work with clients across the globe.

Then we think you’ll love what we’re doing on social media! Follow us on Facebook, LinkedIn, and Twitter as we share fun facts, tips, and more from the world of voice over production. Feel free to contact us if you have any questions about these terms or the voice over industry in general!